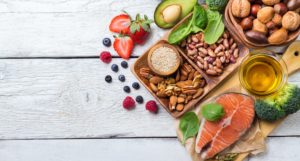 Although twin studies have shown that the gut microbiota includes a heritable component, environmental factors relating to diet, drugs and demographic and anthropometric traits are all major determinants of gut microbial diversity. However, the influence of specific nutrient groups on the human gut microbiome in relation to interindividual variation has yet to be investigated.

A new study, led by Prof. Aldons J. Lusis from the University of California (USA), has found that dietary protein and saturated fat may lead to modest changes in the gut microbiome, with people with high microbiome diversity achieving the least significant diet-induced change.

After a two-week baseline diet, 109 healthy white, Asian and African American men and women (aged between 21 and 65 with body mass indexes of between 18 and 36) were randomized to high (15% total energy) or low (7% total energy) saturated fat diets. Within each fat group, participants received three different protein sources (4 weeks of red meat, 4 weeks of white meat and 4 weeks of legumes), reflecting common dietary patterns among Americans. Microbiome samples for taxonomic characterization were collected at each diet finalization point (2, 6, 12 and 18 weeks).

The overall gut microbiota composition was not affected by dietary protein and saturated fat interventions. It should be noted, however, that dietary saturated fat and protein intake levels led to some changes in taxon abundance levels. Low and high saturated fat levels and protein sources led to differentially abundant operational taxonomic units, of which the majority were described at the genus level.

Specifically, saturated fat had a greater effect than protein source on taxon abundance, although the protein source effect was also relevant without the influence of fat.

These results were explained due to the outweighed effect of sex, age and ethnicity on the overall microbiome community composition. Age, body fat and height were the physical characteristics that showed the greatest number of significant correlations with gut bacterial genera, including Haemophilus, Bifidobacterium, Faecalibacterium, Roseburia, and Akkermansia. These findings show that the imprint of the individual gut microbiome profile trumps short-term dietary interventions on the gut microbiome.