Low fat vs. high fat– which diet is better for the gut microbiota? 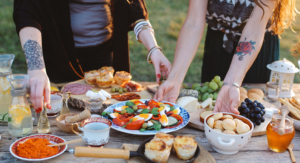 Obesity and cardiovascular disease are on the rise as we have shifted away from traditional low-fat, high carbohydrate diets. Many of us living in more developed countries now eat a higher proportion of fat and a smaller proportion of carbohydrates than our ancestors once did. A new study published in the “British Medical Journal” investigates this dietary transition, providing evidence that a more traditional diet (low fat, high carbohydrate) may promote a healthier gut microbiota. The study shows that a high-fat, low carbohydrate diet can lead to unfavorable increases in markers of inflammation in the blood; while a more traditional diet can lead to increases in protective chemicals produced by beneficial species of bacteria. This scientific study is among the first to investigate the effects of different proportions of dietary fat intake in humans.

To investigate diets differing in fat and carbohydrate composition, scientists conducted a 6-month study. Three groups of healthy young adults were fed diets including the same number of calories but differing in their fat and carbohydrate content. The three diets were: a lower-fat diet (20% fat, 60% carb), a moderate-fat diet (30% fat, 56% carb) and a higher-fat diet (40% fat, 46% carb). Scientists collected fecal and blood samples from participants at the beginning and end of the study. In the low-fat group, scientists saw an increase in the types of bacteria that produce butyrate; this short chain fatty acid is a metabolite associated with many health benefits. Higher abundances of these bacteria correlate with a reduction in low-grade inflammation, while lower abundances are seen in patients with type 2 diabetes.

While many previous studies have reported the benefits of dietary fiber on the gut microbiota, in this study, all three groups ate the same amount of fiber. This result suggests that fiber is not the reason for the benefits seen in the higher-carbohydrate group. Authors suggest that the benefits may instead be coming from increased intake of resistant starch. Unlike regular starch, resistant starch is “resistant” to digestion by humans and is not fully broken down into its sugar building blocks. Like dietary fiber, resistant starch can be fermented by the gut microbiota, producing many chemicals that are good for our health.

On the other hand, the high-fat diet in the author’s study led to increased markers of inflammation in the blood. These markers are used to detect inflammation in the body and are often elevated in diseases like cancer and cardiovascular disease. Authors suggest that these elevated inflammatory markers may be due to the high levels of soybean oil consumed by participants in the high-fat group. Soybean oil is high in omega-6-fatty acids, which are known to promote inflammation.

This study has particular implications for individuals in developing countries who may be transitioning away from a more traditional diet. The authors ultimately advised against increases in dietary fat for countries that find themselves in this state of nutrition transition and emphasize that their results may also have relevance in developed countries where dietary fat intake is already high.

Megan Mouw
Megan Mouw holds a Bachelor of Science in microbiology from McGill University (Canada). Driven by her experiences at UCSF medical center in San Francisco, Megan is passionate about the role that the gut microbiota plays in maintaining health and wellness. She is currently perusing graduate studies in Microbiology and Environmental Toxicology at the University of California Santa Cruz and hopes to share her love of science through writing.
Share: