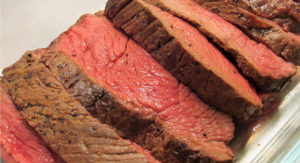 Red meat is enriched in N-glycolylneuraminic acid (Neu5Gc), which is a type of sialic acid that is a type of acid sugar composed of a nine-carbon backbone that is typically found at the outermost end of glycan chains found in all cell types of most non-human mammals. Sialic acids are involved in various physiological and pathological processes. In human, red meat consumption can cause Neu5Gc incorporation into cell surface glycans, which are a type of polysaccharide, especially in carcinomas. It has been hypothesized that chronic inflammation can be triggered when Neu5Gc-containing glycans encounter circulating anti-Neu5Gc antibodies, which has been termed “xenosialitis”.

Humans cannot synthesize Neu5Gc due to an evolutionary loss of the enzyme CMP-Neu5Ac hydroxylase (CMAH). On the other hand, bacteria can use free sialic acids as a nutrient and carbon source, but it is unknown if the gut microbiota triggers the release of Neu5Gc from food or how bound Neu5Gc is metabolized in the intestines.

To investigate the host-microbe interaction as it relates to sialic acid, Zaramela and colleagues from University of California San Diego investigated if a Neu5Gc rich diet could affect the bacterial metabolism and gut microbiota composition in mice and humans. Through 16S rRNA gene amplification, they identified and compared the fecal microbiome from human like transgenic Cmah−/- mice, which were bred to not contain the gene that encodes the CMAH enzyme like humans, and wild type mice that were both fed either a sialic acid-free (soy) diet, a Neu5Gc-rich porcine submaxillary mucin (PSM) diet, or a Neu5Ac-rich edible bird’s nest (EBN) diet.

The authors discovered a significant difference in the bacteria present in Cmah-/- versus wild type mice which were diet dependent. A diet rich in Neu5Gc altered the gut microbiota, especially among Bacteroidales and Clostridiales. Independent of genotype, the microbiome of PSM-fed mice was significantly less diverse compared to the microbiome of those fed soy and EBN diets. Additionally, by computationally simulating 773 metabolic models of the human gut microbiome, the researchers found that members of Bacteroidetes, including Bacteroides fragilis, Bacteroides cacae and Bacteroides thetaiotaomicron, were some of the most efficient microorganisms using sialic acids as a carbon source.

In order to study the sialidase genes present in the microbiome, combined metagenomes were co-assembled and 51 genome bins, which group contigs and assign them to operational taxonomic units (OTUs), containing 21 sialidase genes were identified. Bin13, which contained five sialidases whose closest relative was B. thetaiotaomicron, was the most abundant in PSM compared to EBN diets suggesting it plays an important role in intestinal Neu5Gc metabolism.

To test their findings in humans, the scientists re-analyzed fecal shotgun sequences from the Tanzanian hunter gather group the Hadza. During dry season, when their diet is enriched with meat, bin 13 was more abundant in microbiome samples compared to wet seasons. Of the 24 genome bins discovered, binHz19 which contained sialidaseHz136, had the greatest sequence similarity to sialidase26 which was previously identified in the mouse study. The researchers also discovered that both sialidase26 and sialidaseHz136 release Neu5Gc from food sources (beef, pork and PSM chow) indicating that sialidases exhibiting Neu5Gc preference may be widespread in the mammalian intestine.

In summary, Zaramela and colleagues identified several sialidases that have a preference for Neu5Gc, which are enriched in the gut microbiota of both mice and humans upon consuming a Neu5Gc-rich diet. The authors conclude that although more in vivo studies are needed, a gut microbiome that harbors less bacteria with Neu5Gc-preferring sialidases could result in increased xenosialitis (xeno-autoantibody response to glycan incorporated Neu5Gc) which might promote inflammatory diseases such as colorectal cancer and atherosclerosis.