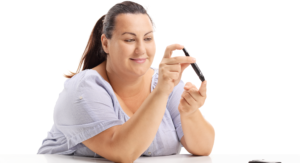 The microbes that inhabit our intestines are responsible for several functions such as synthesizing vitamins as well as modulating our immune system, metabolism and blood sugar levels. Recent studies show that the gut microbiota may affect our body’s response to insulin, a hormone that helps glucose enter into the body’s cells so that it can be used as energy. For this reason, many researchers are interested in targeting the gut microbiota to improve obesity-associated blood glucose impairment since many obese and type 2 diabetes patients suffer from decreased insulin sensitivity and increased blood sugar, also known as insulin resistance. For example, imbalances of the gut microbiota have been associated with insulin resistance in patients with obesity and other metabolic diseases such as type 2 diabetes.

Therefore, researchers from various institutions from France as well as Tufts University in Boston (USA) sought to find a connection between how calorie restriction might improve insulin sensitivity. They also explored the possible association with changes in the gut microbiome, host biology, such as body mass index (BMI), fat tissue and genetics, and various lifestyle factors including physical activity and diet.  The authors of the study analyzed insulin sensitivity, changes in the gut microbiota and metabolism in 27 overweight or obese patients who followed a low calorie diet for 6 weeks.

The authors concluded that the low calorie diet led to a reduction in BMI and body fat as well as an increase in insulin sensitivity. Interestingly, the researchers also identified 10 species of intestinal bacteria that were associated with improved insulin sensitivity. Additionally, there was a strong association with improved insulin sensitivity and a significant decrease in branched chain amino acids (BCAAs) after following the low calorie diet for 6 weeks. This is in agreement with a previous study that found an association between specific gut bacteria and insulin resistance and increased levels of BCAAs in mice. BCAAs consist of leucine, isoleucine and valine and are among the nine essential amino acids carry out various metabolic and physiological processes in the body. Besides dietary intake, the gut microbiota may regulate BCAA levels in the blood which may affect insulin sensitivity, especially in response to a high calorie diet.

This is the first study of its kind that has identified novel associations between glucose levels, lifestyle factors and gut microbiota after a 6-week low calorie diet. Obesity is a multifactorial condition, and targeting the gut microbiota may form part of an integrative approach to treating metabolic diseases such as obesity in the future.