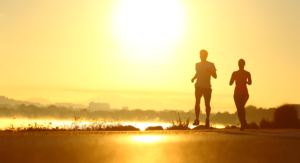 The idea of a universal diet for everyone is beginning to be considered as a simplistic approach, as it does not take into account each person’s unique nature in relation to a range of dimensions, including metabolism and microbiome. That is why the scientific community has suggested moving from a ‘one-size-fits-all’ approach to diet to an integrated personalized treatment approach.

A few years ago, Eran Segal and colleagues at the Weizmann Institute of Science in Israel showed that our gut microbiome was a key determinant in predicting glycemic responses in participants without diabetes.

Could our gut microbiome also play a role in our unique response to exercise? A small study from researchers at the University of Hong Kong in China, the Hans Knoll Institute in Germany and Guangdong Pharmaceutical University in China reveals gut microbiome inhabitants and their metabolites may help predict the metabolic benefits of exercise in subjects with prediabetes.

In a sample of 39 overweight men with prediabetes and without medication, a high interpersonal variability in fasting glucose, insulin, and the homeostatic model assessment of insulin resistance (HOMA-IR) (alongside homogeneous changes in body weight and fat percentage) was observed in response to a 12-week exercise-based intervention. These findings meant participants could be classified as either responders (n = 14)—showing a notable improvement of glucose homeostasis and insulin sensitivity—or non-responders (n = 6).

The authors found that exercise promoted differential alteration of gut microbiota in responders and non-responders. Among other factors, responders exhibited an increase in butyrate-producers (e.g., Lanchospiraceae bacterium), whereas non-responders were characterized by an increase in pro-inflammatory bacteria such as Alistipes shahii.

More interesting were the shifts in gut microbiota and microbial metabolites at a functional level, promoted by exercise. Responders showed a gut microbiota featuring a high expression of genes involved in increased DNA replication, together with an enhanced capacity for producing short-chain fatty acids (SCFAs) and gamma-aminobutyric acid (GABA), which is involved in improved glucose homeostasis. In contrast, an increased catabolism of branched-chain amino acids and aromatic amino acids, which may promote insulin resistance, was shown only in those classed as responders following the 12-week exercise intervention.

In contrast, the gut microbiota of non-responders was characterized by increased production of colonic gases and toxic compounds (i.e., phenolic derivatives and sulfate metabolites), which scientists argue could attenuate the beneficial effects of exercise on glucose homeostasis. The gut microbiota of non-responders after the 12-week exercise-based training was, indeed, quite similar to that of sedentary controls.

In an additional 30 subjects, the authors were able to accurately predict personalized glycemic response to exercise by integrating baseline microbial signatures using machine learning, which is a subtype of artificial intelligence.

Transplanting fecal microbiota from responders—but not non-responders—led to improved glucose homeostasis and insulin sensitivity in obese mice. This experiment in mice showed the causal contribution of gut microbiota to mediating the effects of exercise on the host metabolism.

We already know that the human gut microbiota could be behind the multiple benefits of exercise for our health and wellbeing. Now these findings show that individual gut microbiota composition and functional diversity matter when achieving the well-known metabolic effects of exercise, including improvements in glucose homeostasis and insulin sensitivity.

As exercise plays a central role in preventing and treating diabetes and related complications, working on gut microbiota-targeted strategies and considering other inputs beyond baseline microbial signatures will help with improving response variability to exercise.