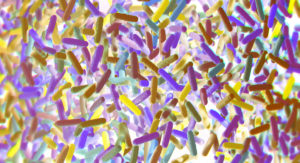 Although twin research has shown that gut microbiota features a heritable component, we do not know whether gut microbial genetic variations can shape phenotypic differences that affect host health.

A new study, led by Dr. Eran Segal from the Weizmann Institute of Science in Rehovot (Israel), has identified structural variations in gut microbial genomes that vary across people and are related to risk factors for disease.

In contrast to ours, the genomes of microbes can vary across the bacteria life cycle due to the loss of specific genes, the exchange of genes with other microorganisms—through transformation, transduction or conjugation—or the acquisition of new genes. Such genome rearrangements are called structural variations (SVs) and can have a profound impact on prokaryotic genomes, driving an altered cell phenotype with functional consequences.

The researchers developed two algorithms to identify SVs in microbiome data collected from 887 healthy Israeli individuals. These algorithms were, first, an ‘iterative coverage-based read assignment’ for inferring relative abundances of bacteria and, in a second step, the ‘SGV-Finder’ for detecting SVs.

Most of the SVs identified in the Israeli participants were also found in 1,020 samples from a Dutch cohort. On the whole, more than 70% of SVs were replicated for 75% of microbes present in both cohorts, despite their differences in genetics, lifestyle and dietary background, along with an alternative study methodology.

Beyond replicating across different healthy cohorts, Zeevi and colleagues also found that SV profiles were stable within individuals over time. These results are in agreement with the authors’ previous findings showing that diet and lifestyle—rather than host genetics—may be the primary dominant factors that shape the human gut microbiome.

Analysis of SV function revealed that SVs were depleted in genes that take part in basic metabolic processes, whereas they were enriched for genes involved in bacterial growth rate and horizontal gene transfer, including conjugation and transposition.

The authors moved towards understanding the mechanisms behind the associations by exploring the gene functions encoded by the SVs and their association with host disease risk factors. Up to 124 SVs were associated with risk factors for disease in the Israeli cohort and most were replicated in the Dutch cohort.

Of particular interest was the fact that individuals in the Israeli cohort with Anaerostipes hadrus with a deletion of a 31,000-base pair region weighed on average of 6kg more and had a higher waist circumference than people whose A. hadrus microbe retained this region. Some of these associations were also replicated in the Dutch cohort.

The region involved in these associations encoded genes involved in transporting and metabolizing sugar alcohols to butyrate, which is a molecule known to have health benefits and which has been associated with lower metabolic risk. Thus, the same commensal gut microbe may have different effects on participants’ weight, depending on the presence of the structural variant.

Other associations were found between SVs and age and other risk factors, including median blood glucose levels. Some showed associations that contrasted with previous studies, showing a protective effect when focusing only on their taxonomic levels (e.g. a depletion SV in Faecalibacterium prausnitzii was positively correlated with blood glucose levels).

On the whole, these findings show that enriched or depleted genetic functions in the gut microbiota, which are replicated in different populations with different genetic background and diets, may shape some disease risk factors. Although causation cannot yet be inferred, exploring the gut microbiome’s variable genomic regions may help us gain a better understanding of gut microbes’ contribution to host health and disease.