Fermentable fibers affect the structure and function of gut microbiota, with potato starch leading to the greatest increase in short-chain fatty acids 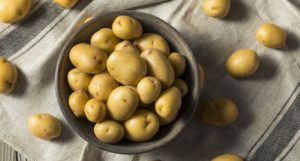 Of all non-digestible carbohydrates, the scientific community is paying special attention to resistant starches (RS) that reach the colon intact, where they are subsequently metabolized via gut bacteria. Their benefits for host health may range from affecting insulin’s control of blood sugar and weight to slowing down chronic kidney disease progression and they likely arise from a multitude of mechanisms that are poorly understood. So far, however, studies determining the gut microbiota’s contribution to the health benefits of fermentable fibers are lacking.

The researchers supplemented the habitual diets of 174 healthy young adults for 2 weeks with different types of fermentable fibers: resistant starch from potatoes (n = 43), resistant starch from maize (n = 43) and inulin from chicory root (n = 49). A rapidly digestible corn starch was used in the control group (n = 39). Changes in gut microbiota composition were assessed using 16S ribosomal ribonucleic acid gene sequencing and the function of the colon’s bacterial communities was explored by quantifying fecal SCFA concentrations before and during dietary supplementation.

Although all three fermentable fibers changed participants’ fecal microbiota from baseline, potato starch led to the greatest increase in SCFAs.

The gut microbiome of participants supplemented with resistant starch from potatoes exhibited an increase in the levels of bifidobacteria. However, higher fecal butyrate concentrations were observed in individuals who responded to the dietary intervention with an increase in Ruminococcus bromii or Clostridium chartatabidum. In addition, the abundance of the butyrate producer Eubacterium rectale both before and during dietary supplementation with resistant potato starch correlated positively with fecal butyrate concentrations.

These results show the existence of a high inter-individual variability in gut microbiome responses to diet, as individual microbiome at baseline determines the response to different fermentable fibers.

In this study, R. bromii is a candidate for the role of primary degrader and E. rectale is a butyrate producer. Changes in R. brommi were positively associated with changes in the abundance of E. rectale, which suggests that the relative abundance of both fermenters might contribute to explaining the differences in individual butyrate concentrations.

On the other hand, resistant maize starch and inulin were unable to generate a significant increase in fecal butyrate levels.

To sum up, this study shows that not all fermentable fibers work in the same way in terms of their capacity to stimulate SCFA production. In agreement with previous findings, this data emphasizes the crucial role of the personal microbiome fingerprint in responding to dietary challenges, given that it is difficult to overwhelm past environmental effects on the microbiome.