She spoke at Experimental Biology 2015 at a symposium called ‘An interdisciplinary examination of potential effects of maternal obesity on lactation physiology and the human milk microbiome’. After the session, she spoke with GMFH editors.

“Mothers can transfer the microbiota through delivery, but also through breastfeeding,” says Collado. 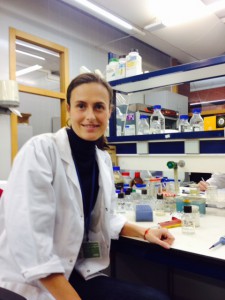 When she began to study infant microbiota colonization, Collado decided that the milk microbiota had an interesting role as the postnatal link between mother and infant.

Collado says the milk microbiome is affected by the mother’s health status, the baby’s gestational age, and lactation time, and perhaps more surprisingly, by antibiotics and mode of delivery.

In terms of maternal health status, Collado found that the milk of heavier women looked different from that of leaner women.

“We found the milk microbiota from obese women has less bacterial diversity and also has less content of bacteria that have been related to beneficial health status. The most significant thing is the loss of diversity.”

The babies of these women, then, were being introduced to a smaller set of bacteria. “If you are reducing the microbial exposure then the baby is not getting the adequate immune system training,” Collado says.

Mode of delivery, already a well-known factor in infant gut colonization, was also associated with changes in the mother’s milk microbiome.

“We suggest that maybe stress and hormonal changes during delivery may influence this bacterial community,” she explains.

Collado — a mother herself — is optimistic that she and other researchers will begin to understand how to help women maintain healthy milk microbiomes in the face of all these factors. “It would be really interesting to supplement the mothers — in the same way that we are taking vitamins or folic acid to help our baby — to try to use probiotics and/or prebiotics in order to modulate our microbiota to bring to our kids all the potential benefits of these bacteria. But of course we need to do more studies.”