Dr. Jonathan Braun (MD, PhD) is a physician and researcher interested in how the immune system affects susceptibility to inflammatory bowel disease and cancer. He studies, among other things, microbial-immune commensalism in the intestine, and new strategies in functional immune

Dr. Jonathan Braun (MD, PhD) is a physician and researcher interested in how the immune system affects susceptibility to inflammatory bowel disease and cancer. He studies, among other things, microbial-immune commensalism in the intestine, and new strategies in functional immune assessment. He is a professor at UCLA’s David Geffen School of Medicine.

At the 2014 Harvard Probiotics Symposium, GMFH interviewed Dr. Braun about his presentation and his ongoing research. 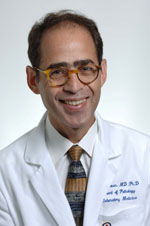 Tell us about the concept of ‘metabotypes’ that you shared in your presentation.

All those bacteria together in your gut are making a bunch of products. Thousands of different products. So with the spectral nature of all the organisms that live there, one might imagine that we’re just a gradation of one person to the next in terms of their products.

The analysis that led to [metabotypes] indicated that, actually, people’s microbial communities make one mode of products or a different mode of products. [As a metaphor,] you might imagine Chinese food as opposed to European food. It’s good food, it’s diverse, but it’s different. And all the different ingredients together make for that type.

How might the two human metabotypes relate to inflammatory bowel disease?

We know that almost everybody who has Crohn’s disease has metabotype two. Whereas among ‘healthies’ it’s about 50/50 [between metabotypes one and two]. In affluent, Los Angeles-based communities: that’s our demographic.

The question we have now is ‘chicken and egg’. It seems that metabotype two is a problem. But is it a problem because the disease has caused you to change your diet, your microbial community, and so it’s secondary? Or is it that you have a certain metabotype and that puts you at risk for disease?

There’s a few reasons why we think it’s more likely to be the second [situation] than the first. In which case, metabotype one is a healthy one and if you have metabotype two it’s making products or not making products which are a problem for you.

How do you think genes might relate to metabotypes?

In two ways. One is that we know that many of your genes change the habitat of your intestine, and hence change what bacteria are there and what they’re making. We have good examples of that. And so for some people you sort of ‘have it easy’ because your habitat is good because of your genetics. [Alternatively,] you might have a problematic habitat because of your genetics. Even before you eat anything. And that’s because many of the products that you make are things which are used by, or affect, the success of different types of bacteria… that’s gardening of your microbiome by genetics.

But it works in the other direction too, where you have organisms that are making products [and] your genetics will determine what you ‘think’ about it. Like if you have a ‘Portland, Oregon’, sort of epithelial system, then I’ll see some things that look a little scary, but say, “Well, it’s okay. Tomorrow will be better.” Or genetically you might have a mucosa which will have a much more difficult time dealing with that, and so your genetics will determine, for particular microbial products, how close that puts you to the threshold between health and disease.

You said in your presentation that a future clinical challenge will be to find convenient ways of measuring certain bacteria or metabolites. Can you tell us more?

We’re getting an idea that in adults there are a relatively small number of bacteria, or bacterial products, which either are biomarkers of health or not health. Or maybe even causally related.

For a person who wants to sustain their health, you want to know where you are. And so the trick is [figuring out] what to measure, and how to do it in a way that’s robust enough. We need ways to do it, which ideally you could do at home, you could do inexpensively so you could measure regularly. And the data is really good so you’re getting meaningful information. So that’s our challenge.

I think most likely it should not be measuring things in poop because I think poop isn’t a pleasant thing to deal with. The other things to sample are urine or saliva, and saliva’s actually the best readout of what’s in your blood. If you salivate, that’s a direct filtrate of what’s in your blood at that moment. To me, it’s almost certain that… we’re going to be measuring, not organisms, but metabolites of organisms, and ones that have meaningful levels in the blood that you could detect in the saliva.

Which of your colleagues’ talks resonated with you at the Harvard Probiotics Symposium?

I was really struck by David Mills’ example of looking deeply, as we did decades ago, at the molecular physiology of organisms to really understand how they work. We can’t do that for everything, but we could do it for some, and I realize that there’s a renaissance of need and opportunity [there].

The second is getting quickly to metabolites that matter, and Stan Hazen’s work is so important as an example of that. [TMAO is] a metabolite that matters and it gives you a lot of ideas of what to do about it, how to monitor it.

A third is Paul O’Toole’s work. What really struck me there is thinking about sustaining health as you become elderly: that is a ‘health problem’ which we all will encounter. The ability to sustain your well-being so you could be a productive member of society and you can have the most full and meaningful life is the most human aspiration. So their ability to bring very complex biology to a profoundly human question touched me.