Dr. Gail Hecht is Professor of Medicine and Microbiology/Immunology, and Chief, Gastroenterology and Nutrition, at Loyola University Chicago. She serves as Editor-in-Chief of the journal Gut Microbes, published by Landes Bioscience. 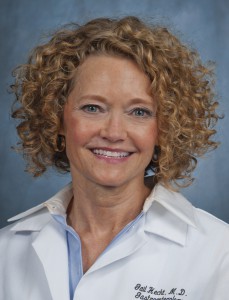 I did a Master’s in microbiology… For various reasons [I] decided to go to medical school [afterward]. But research always interested me. Then, once I realized I wanted to focus on gastroenterology, I started out studying tight junctions in Jim Madara’s lab and looked at the impact of C. difficile toxin on intestinal epithelial cell tight junctions. So that was my first touch on a bacterial project with regard to the GI tract.

It just grew from there. I found enteropathogenic Escherichia coli [EPEC] interesting… because it’s a known pathogen but yet was so different from the other pathogens like Shigella and Salmonella, which are invasive. EPEC is not invasive. It doesn’t produce a toxin per se, like C. diff or even like enterotoxigenic E. coli. But it adheres very closely to the intestinal epithelial cells. And all of those gram-negative enteric pathogens express what’s called a type III secretion system. That’s, for all intents and purposes, a molecular syringe through which bacteria can inject their own proteins directly into the host cells. And those proteins then alter intestinal epithelial cell physiology or function. That’s really what caught my attention.

For you, what falls into the category of ‘pathogen’?

For me, I guess it’s simplistic. There are certain organisms – I mentioned a few: Salmonella, Shigella, enterohemorrhagic E. coli, all the pathogenic E. coli, for that matter – when someone has exposure to those bacteria they can ‘set up shop’, can colonize, [and] you get disease. You get diarrhea, you get inflammation, fever; whereas, the [commensal] microbiota don’t do that.

To me, pathogens have genes that are known as virulence genes. Look at Shiga toxin from Shigella or from enterohemorrhagic E. coli: the commensals don’t express those toxins. Just like a type III secretion system, the commensals don’t have those. They’re not injecting their proteins [directly] into our cells.

Most people you would ask could tell you what a pathogen is. It does harm. That’s not to say that there aren’t commensal bacteria in the gut that can’t do harm. They can, given the appropriate circumstances. If they escape from the intestine you can get abcesses outside of the GI tract; maybe in the presence of an inflammatory state some bacteria start expressing molecules that make them contribute to that disease. We’re learning more an more about that, how in some instances… they are commensals, but they’re not all beneficial. Some could actually contribute to disease. Does that make them a pathogen? Maybe they’re opportunistic pathogens. But they’re not just outright pathogens.

Can you tell us about some of your current research, and how it might be applied clinically in the future?

A few of the proteins that [enteropathogenic Escherichia coli] inject into host cells actually attenuate the inflammatory response. So our intestinal epithelial cells are poised to detect pathogens and elicit an inflammatory response to combat infection. [But] EPEC inserts some of its own proteins to take control of the host cell response, which I find fascinating. A few of these proteins will block inflammatory signalling cascades, so the inflammation that results from the infection is actually less than if those proteins weren’t being injected in.

If you take that a step further, think about the numerous inflammatory disorders that occur in the GI tract: inflammatory bowel diseases… one of our thoughts has been, since the bacteria are so clever in ways that they can control inflammation, might we learn something from those proteins? This would be very long-term, but could we learn something from those proteins about drug development, or strategies to control inflammation that’s not induced by infection.

I’ll give you an example. This is some work that’s just been presented in abstract form… Let’s say you can induce inflammation in a mouse model with chemicals called [dextran sodium sulfate, or] DSS. It’s a pretty commonly-used way to induce inflammation. We can allow that colitis to occur, and then infect the mice with EPEC, and the mice that get infected with EPEC actually fare better than those that just have the DSS alone. Because the inflammation is worse, the repair of the epithelium is more rapid, and the survival is significantly increased.

You can think about – again, far in the future – drug development, perhaps, based on what we’ve learned from bacterial proteins. We wouldn’t use pathogens as drugs. Bacteria as drugs, yes, but probably not pathogens – not unless they’re significantly altered such that they wouldn’t cause disease in and of themselves. You might be able to get the protein into cells in different ways, not requiring this type III secretion system. So it’s not like you can just put the protein in the lumen and the cells take it up. They don’t. It has to somehow get inside of the cells.

That’s a link, but it’s futuristic thinking. It’s interesting to think about those strategies. We’ve certainly learned a lot about how to control human health from bacteria and viruses.

What other research do you carry out in your lab?

We do different types of things… If you think of inflammatory bowel disease or infection, one common endpoint is that tight junctions are disrupted, and that contributes to the disease because the permeability of the intestinal epithelium has been altered. We’re interested in looking at mechanisms by which enteropathogenic E. coli can not only damage tight junctions but prevent their repair.

What are the main challenges you encounter in carrying out your research on pathogens?

For me, the pathogen that we work on is a human pathogen, enteropathogenic E. coli, but you can’t study those pathogens in humans… So we’re always looking for animal models to give us clues about what happens in an intact organism. We do a lot of work on tissue culture of intestinal epithelial cells and that has great advantages because then you can measure directly what’s happening to that layer of cells, and that’s my interest. But in reality, in an intact organism it’s not just the intestinal epithelium. There are inflammatory cells, submucosal cells, muscle cells – it’s just the whole package – so you need an animal model. We use the mouse, and a lot of people use mice to study pathogens. In most cases you have to give them antibiotics to reduce the level of microbiota such that the pathogen can actually infect the animal. Otherwise they would not be susceptible to that infection. There’s a family member of EPEC called Citrobacter rodentium which is a natural mouse model and it’s much like EPEC, and a lot of people use that because it’s much like EPEC. But that’s the problem I have. It’s much like EPEC but it’s not EPEC. There are some key differences. And I have used Citrobacter rodentium somewhat, but prefer, really, to study the human pathogen. So, models: model systems are somewhat of a problem for sure.

What role do you think the microbiota plays (or will play) in the field of gastroenterology?

It plays any role you can think of. That’s where we are right now. We’re in this ‘heightened discovery’ phase. We’ve known for centuries that there are a lot of bacteria in the gut, and they’ve been ignored for the most part.

It’s funny to look back, that the answer may [have been] right under [our] nose. But it’s then amazing to me to watch the field grow and evolve, and to see how the gut can contribute to so many diseases that aren’t gut-based. Metabolic syndrome, perhaps obesity, maybe even cancer, allergy, so many areas. It’s very exciting to me, and I’m hoping that we will be able to decipher enough of the information such that we can harness that knowledge and turn it into therapeutic strategies for disease.

What cautions would you advise going forward with microbiota research?

I always have a little bit of concern because I remember in the molecular biology area when, all of a sudden, we could sequence entire human genomes and it’s like, “Oh, now we’re going to understand every disease that has a genetic basis or partly genetic basis! We’re going to find these mutations and know how to fix those!”. And then you realize it’s not just one mutation, there are SNPs, there are all these different little aspects, and then maybe that alone is not enough: there’s something about the environment that contributes. It wasn’t the answer to everything that we hoped it would be. And I don’t know if that is going to be the same story with the microbiome. We’ll learn something with the microbiota. We’ve already learned a lot. But will we be able to hone it to such an exact science that we can really be manipulating human gut microbiota in a specific way to prevent or treat disease? It would be great if we could. I hope we can [but] I think it’s premature.

People want to know so much about probiotics. I give talks and I get asked these questions all the time: “I have [multiple sclerosis, or] MS. Which probiotic is best for me to take?” People don’t want to hear “We don’t really know yet”… but the lay public are wanting those types of specific answers and recommendations and so are the doctors, but they just aren’t there yet. We’re trying.

I think we would all like a quick fix for whatever we see in practice, or if you’re a patient, whatever’s ailing you. Something will come of it, of course. Look at the [fecal microbiota transplants, or] FMT for C. diff: that’s pretty cool. Many of the products that are now being studied in clinical trials, that’s terrific. So we’re making some advances but maybe it won’t be as specific as we hoped.