His research group recently published a pilot study in which they treated patients with refractory Crohn’s disease (CD) with a single fecal microbiota transplantation (FMT) through the mid-gut. In the paper, the authors noted that FMT for treatment of intestinal diseases was recorded in traditional Chinese medicine as far back as the fourth century. However, few modern clinical studies exist.

First, the researchers established a new standardized laboratory protocol for FMT. Then, they treated 49 patients, 30 of whom qualified for the study’s analysis with at least a 6-month follow-up. Patients underwent a single FMT, and received a small sustaining dose of Mesalazine. They also received a ‘food plan’ to follow after FMT. After 1 month, clinical improvement was 86.7% (26/30) and clinical remission was 76.7% (23/30). Patients’ body weight also increased.

Evidence indicated that the efficacy of FMT did not depend on the genetic relationship or close contact between the donor and patient, or on the dose of bacteria. The fresh fecal microbiota samples, however, were associated with a higher rate of clinical improvement and clinical remission than frozen microbiota. These findings need to be validated in larger studies.

Authors say that further studies need to test these clinical FMT results against alternative therapies, but that they have shown the potential of their FMT procedure to treat refractory CD.

Dr. Faming Zhang spoke with GMFH about this study. 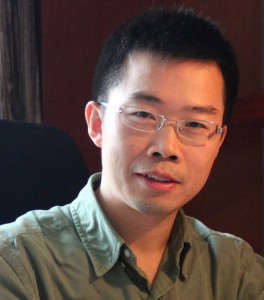 FMT has been used to successfully treat C. difficile infection. What gave you the idea to use it for patients with Crohn’s disease?

C. difficile infection is an acute infection. However, [inflammatory bowel diseases or] IBDs, including Crohn’s disease and ulcerative colitis, are chronic inflammatory diseases. If dysbiosis in IBD is a fact, then we don’t know whether dysbiosis is a cause or a consequence of inflammation. We don’t know which one comes before the other one, chicken or egg. But it doesn’t matter for treatment; this study strongly supports the link between intestinal bacteria and IBD. Our hypothesis is that ‘reconstruction’ of gut microbiota should be helpful for treating those with Crohn’s disease.

Why did you study refractory Crohn’s disease in particular?

How did you select your FMT donors?

First, they must be healthy, without any infectious disease or other potential diseases. We need to test their various bacterial inflammatory markers.

I want to highlight another item: it’s age of the donors. In our study, our donors were children. In this study, they [ranged] from 8 to 15 years old.

There are two reasons for our consideration of donors’ age. The first reason is a safety consideration. Generally for young children they have no sexual life in China, no sexually transmitted diseases. So less risk than adults.

The second reason is a literature evidence consideration. So let’s look back into the old, old literature of the traditional Chinese medicine. Doctors suggest using eleven- to twelve-year-old children. Possibly – I just guess – it is this age period that a person has the most wonderful microbiota status in his or her whole life.

Were there any negative effects of the FMT treatment?

From the more than 280 cases [not all of whom were included in this study], no serious adverse events were observed in our center.

Did anything surprise you about the results?

What are the next steps in your research?

My group is focusing on two things: the first thing is to move standardized FMT forward. The second is to explore why FMT is so powerful against intestinal diseases and other diseases.

We have established a standard clinical flow for FMT, including purification of microbiota in the lab, then transfer to the endoscopy center, and standard preparation of patients before and during the procedure of transplantation. We developed an automatic system (GenFMTer) for isolation of microbiota from stool. I am the principal inventor of this novel system. Now, the operator of the system process in the lab cannot touch the stool, cannot see the stool, cannot smell the bad smell. This is the most important step to move standardized FMT into [the] mainstream.

For a recent review that discusses the potential of FMT to treat IBDs, see this article from a Xi’an research group: