Dr. Emeran Mayer, on the complexities of gut-brain research

Dr. Emeran Mayer, an expert on the clinical and neurobiological aspects of the gut-brain axis, is a Professor in the Department of Medicine, Physiology and Psychiatry at the David Geffen School of Medicine at UCLA. He is also the Executive

Dr. Emeran Mayer, an expert on the clinical and neurobiological aspects of the gut-brain axis, is a Professor in the Department of Medicine, Physiology and Psychiatry at the David Geffen School of Medicine at UCLA. He is also the Executive Director of the Oppenheimer Family Center for Neurobiology of Stress, and Co-director of the CURE: Digestive Diseases Research Center.

Dr. Mayer spoke at the Harvard Probiotics Symposium in 2014; here, he expands upon his presentation by answering some questions about his area of research. 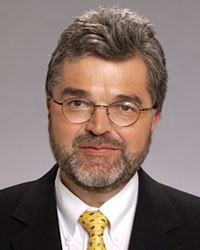 Can you explain some of the complexities of using animal models in gut-brain research?

First of all, in terms of the available data there’s a big difference [between animals and humans]. We have a lot of animal studies, and admittedly from a small number of labs and not independently replicated by many, and we have very few [human] clinical studies, like in [irritable bowel syndrome, or] IBS, associating microbiota data with behavior or clinical symptoms.

The next main difference is that, any time you try to assess complex (human-like) behaviours in animals, such as chronic pain, emotion, or complex social behaviours, you always have to rely on simple, reflex type of responses. So it’s not the complex feeling of pain that we can measure in animals, but it is nociceptive reflexes. We do not really know how the animal’s experience of pain relates to the complex human feeling of pain.

That’s the reason why very few things have translated from one to the other.

Finally, in rodents we use inbred strains or genetically modified animals that are rather homogeneous in phenotype; hence, we can expect some homogeneity in our outcome readings. In humans, this is more difficult because we have to deal with heterogeneity in our subjects. In humans there’s no homogeneity, be it a patient or a healthy control population.

In summary, therefore, in an area that involves subjective human reports of experiences, symptoms, etc., it’s very difficult to use the animal data, or to translate from animal data to humans.

In an ideal world, what combination of studies would you need to feel confident in translating results “from mice to men”?

The most important thing we have to take into account when it comes to diseases such as IBS or IBD: there are subsets of patients within each group which probably have their own microbial phenotype, probably also different brain phenotypes, and other diseases markers. Therefore, to overcome the heterogeneity we have to study very selected subgroups of homogeneous people or patients. To start with, we certainly would have to separate males and females, certain age groups, similar ethnic backgrounds, similar diets, etc.

None of these have been taken into account up till now.

Alternatively, we could take very large samples of thousands, or rather ten[s of] thousands, of people and then cluster them afterward into the subtypes. Both approaches are fine, but require decisions to be taken, different methodologies, and both have their pros and cons.

Finally, if you identify something in a human study, by either of the two approaches, that’s the time to go, then, back to the animal lab and confirm and explore the underlying mechanisms for this finding. There’s been a lot of talk about metabolites at the Harvard Probiotics Symposium and we’ve started to do this: go back and test that metabolite in an animal model and see, what does it do to the brain? Once we see effects, we then can explore [their] clinical relevance in one of the subsets of patients.

Instead of saying we establish all this in animals and then in humans, it’s reverse translation, or rather ‘forward and backward’ translation, before we can establish its human relevance.