Quality and quantity of gluten, maturity of gut functions influencing antigen trafficking and handling (e.g. pattern recognition receptors and barrier function) and changes in microbiome composition are factors that contribute to the pathogenesis of the disease.

The prevalence of Celiac Disease (CD) has increased in the U.S. in the past 35 years – its true prevalence actually doubled every 15 years. The main driver behind this multifactorial, complex disease seems to be the interplay between genes and gluten, but as evidenced by recent studies, there are additional factors driving this epidemic of CD. Quality and quantity of gluten, maturity of gut functions influencing antigen trafficking and handling (e.g. pattern recognition receptors and barrier function) and changes in microbiome composition are factors that contribute to the pathogenesis of the disease. Gut microbiome change is an environmental factor that could augment the immune response, potentially through epigenetic mechanisms in the case of CD. 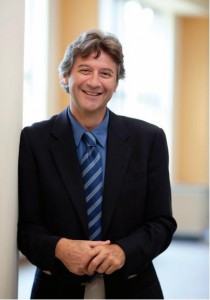 Alessio Fasano, a doctor from Massachusetts General Hospital, presented evidence for the role of the microbiome in the onset of celiac disease in his talk “The Role of Gut Microbiome and Metabolome in the Onset of Celiac Disease in Genetically At-Risk Individuals”. This topic was discussed during the American Association of Gastroenterology (AGA) translational symposium “Celiac Disease – Which factors are at play in childhood that increase the risk to develop the disease in adulthood?” at this year’s Digestive Disease Week (DDW) in Washington D.C.

CD is an immune disorder that is mediated by T cells. About 1% of the population worldwide is affected by this disease, which is characterized by the loss of oral tolerance to dietary gluten (a protein in wheat, rye and barley) resulting in the recruitment of immune cells that destroy intestinal epithelial cells and lead to villous atrophy. In these processes, innate immunity plays a critical role. Dr. Fasano emphasized the importance of the proper training of the immune system by the microbiota during the first years of life, also referring to the crucial role of breast milk in the delivery of (food) antigens to develop oral tolerance in the infant. One example showcasing the importance of breastmilk for the microbiota is that human maternal oligosaccharides in breastmilk do not have nutritional value – they are food for the infant intestinal microbiota.

The infant intestinal flora, which is established to some degree after the first year of life, influences the postnatal development of the immune system. Babies at risk for CD have differences in their microbiota composition compared to babies not at risk for CD. Descriptive studies have shown that they lack Bacteroidetes during the pre-clinical phase of CD, suggesting a role for bacterial dysbiosis in the development of the disease.
Dr. Fasano emphasized the fact that we inherit two parallel genomes, the human genome and the microbiome, together called the ‘macrobiome’ or ‘macrogenome’. Bacterial dysbiosis is considered a possible mechanism responsible for increased risk for CD in children born by c-section, and the metabolome is potentially the link between the human genome and microbiome in CD.

Studies on how to mechanistically link microbiome and metametabolome profiles to clinical outcome are currently ongoing. Similar to the microbiome profile, the metabolite profile was different in children developing CD, months prior to the onset of the disease in comparison to healthy children. Using intestinal human organoid cultures from patients and healthy subjects, Dr. Fasano’s team and others are studying the stem cell niche to find mechanistic links for the loss of barrier function. Currently, one hypothesis is that the stem cell niche is not able to compensate for the damage caused by Th1 responses in CD patients and at-risk individuals.

One striking finding in mucosal and systemic immune functions in CD is that T regulatory cells are paradoxically increased in CD in comparison to other autoimmune responses, which seems to be related to the abundance of non-functional FoxP3 isoforms in the lamina propria – is this a consequence of the altered microbiome? Research is ongoing.

Dr. Fasano introduced the Celiac Disease Genomic Environmental Microbiome and Metabolomic study (CD-GEMM), currently being conducted by a versatile team of doctors and scientists at the Center for Celiac Research at Massachusetts General Hospital, MassGeneral Hospital for Children, and the Celiac Program at Harvard Medical School. The working hypothesis of this study states that a combination of introducing gluten into the diet and a particular microbiota composition in infants who are genetically at risk for CD activates specific metabolic pathways that can contribute to the loss of tolerance to gluten and to the onset of autoimmunity as reflected by specific metabolomic phenotypes. The goal of the study is to elucidate the factors that contribute to the development of CD, focusing on ‘genomic’, ‘environmental’, ‘microbiome’ and ‘metabolomic’ aspects. Within this study, Dr. Fasano and his team want to find the (pure observational) signature before the onset of CD.

In summary, several recent studies suggest a role of altered gut microbiota composition and function in celiac disease, which is accompanied by altered metabolite profiles. Microbiota might be able to either promote or reduce disease- associated immunopathology. Further studies need to determine cause and effect of the associations found so far and identify ways to manipulate the gut microbiota (and/or metabolites) for therapeutic or preventative causes by elucidating the underlying mechanism(s).

Stefan Jellbauer is a Field Application Scientist in the Biotech industry. Previously, he was an ORISE fellow at the Food Safety division of the FDA and a Postdoc in Manuela Raffatellu’s lab at University of California, Irvine, where he studied host-pathogen interactions and mucosal immunology. He obtained his PhD in 2010 from Ludwig-Maximilians University in Munich, Germany.