Recent research in this area suggests that dietary fibre recommendations should be refigured in future.

Modern lifestyle and Western diet have led to a substantial depletion of gut microbial diversity, which is linked to many non-communicable diseases (NCDs). In a recent commentary published in Trends in Endocrinology & Metabolism by researchers from the University of Alberta (Canada), it has been argued that we need to reconsider nutritional recommendations to focus on fibre in an attempt to restore proper composition and function of the ‘disappearing’ gut microbiome.

Recent research in this area suggests that dietary fibre recommendations should be refigured in future. Although dietary fibre intake recommendations for adults range from 18-38 g/d (see table below), this seems not to be enough to prevent NCDs. Beneficial effects of dietary fibre have been broadly studied, but only in recent years have researchers investigated to what extent they are mediated by changes in both composition and function of the gut microbiota. Microbiota-accessible carbohydrates (MACs) found in plant-derived fibre are the primary substrates for certain gut bacteria in humans. In fact, rural human communities from South America and Africa have a low prevalence of NCDs and this fact has been related to a higher gut microbiota diversity, driven by a market economy based on vegetables, fruits, wild game meat and fish for sustenance without including flour-like products and processed food. This suggests that following a plant-based diet is a nice step forward in order to keep a more diverse gut microbiota, as it prioritizes at the first level the consumption of vegetables, fruits and legumes, which are known to be rich sources of dietary fibre; the current Western diet is high in fat and simple carbohydrates and low in fibre. A second step may be fibre supplementation of widely consumed foods (fortified foods) or even taking fibre supplements if healthy eating habits are achieved. 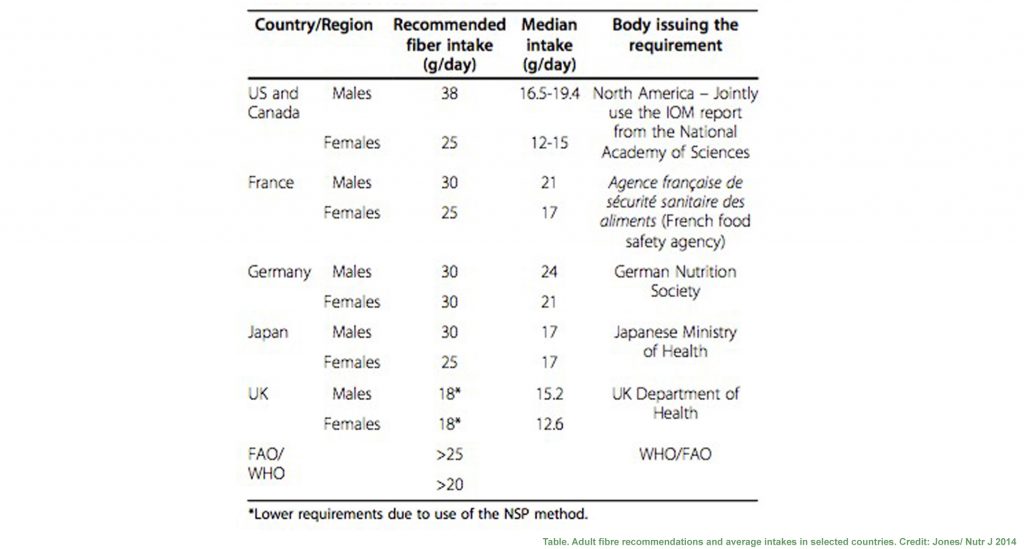 Although revised recommendations should move in the direction of increased dietary fibre, there is still no consensus about the ideal daily amount. A recent study, led by Dr. Kishore Vipperla from the Division of General Internal Medicine at the University of Pittsburgh (USA), showed that moving African Americans to a traditional South African diet with a daily dose of 55 g of dietary fibre–mainly in the form of resistant starch-and reduced fat and protein improved mucosal biomarkers of colon cancer risk within just 2 weeks. Together, these results suggests that current guidelines for the consumption of fibre rich foods are too low and increasing the fibre recommendation to more than 50 g/d in African Americans, and perhaps in all populations consuming a western diet, is likely to have an immediate effect on colon cancer risk. This level of fermentable fibre intake in human subjects correlates well with estimates of dietary fibre intake for ancient diets and traditional high-fibre diets in the Mediterranean, Africa and China.

Even now, dietary fibre intake in most countries around the world is far below recommended levels. The gap between dietary fibre recommendations and intakes is so extreme in Western countries, as most Westerners only consume half of the amount of dietary fibre recommended by guidelines; this has been referred as the “fibre gap”. A study in mice showed that loss of gut bacteria diversity related to low-fibre diet may be inherited and irreversible over generations. Thus, enriching the food supply with dietary fibre might have an essential role in preventing lost of certain beneficial bacterial species. Beyond boosting the consumption of dietary MACs, the researchers suggest reintroducing missing taxa that were lost through modernization, which can be achieved either by administering probiotics (food) or live biotherapeutics (drugs).

In conclusion, it’s time to change nutritional recommendations to focus on fibre, as it is the primary substrate for nourishing gut microbial communities. Concomitantly, people should be encouraged to consume quantities of fibre that more closely match the recommendations. Enriching the food supply with dietary fibre seems a plausible approach.