In recent years, several studies reported a shift in the intestinal microbiota in humans and mice in response to high-fat diets. This shift is characterised by a reduction of Bacteroidetes and an increase of Firmicutes. The Erysipelotrichi, a bacterial class

In recent years, several studies reported a shift in the intestinal microbiota in humans and mice in response to high-fat diets. This shift is characterised by a reduction of Bacteroidetes and an increase of Firmicutes. The Erysipelotrichi, a bacterial class within the Firmicutes, was shown to be associated with symptoms of the metabolic syndrome. Furthermore, faecal transplantation transmitted the obese phenotype, impressively demonstrating the microbial impact on host metabolism. However, the exact role of gut bacteria in obesity development is still controversial and therefore I aim to find out based on which mechanism the intestinal microbiota contributes to the development of obesity and its comorbidities. In the work published in mBIO (doi: 10.1128/mBio.01530-14), I demonstrated the obesity-promoting effect of a certain human gut bacterium, which is a member of the Erysipelotrichi, Clostridium ramosum. 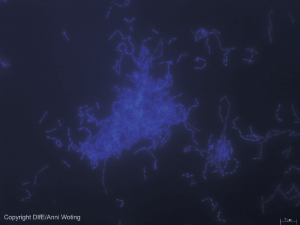 The work with strict anaerobes is challenging per se. However, the most difficult and time-consuming task was the gnotobiotic animal experiment (C3H/HeOuJ mouse strain). The mice are kept in isolators, which renders the handling of the animals and the execution of the experiments more tedious and time-consuming. For example, the measurement of gut permeability or glucose tolerance had to be optimized to maintain the gnotobiotic status.

Our study shows that C. ramosum promotes obesity in gnotobiotic mice in response to a high-fat diet. This is concluded from the finding that gnotobiotic mice harbouring C. ramosum gained more body weight and body fat than gnotobiotic mice without this organism even though all were fed the same high-fat diet. The obese mice displayed an increased gene expression of the fat transporter Cd36 in the ileum and the glucose transporter Glut2 in the jejunum. This led us to suggest that C. ramosum promotes obesity via facilitated nutrient absorption in the small intestine.

Until now, we only investigated the obesogenic potential of C. ramosum in gnotobiotic mice, which limits the generalization of our study. To mimic the human gut situation, our SIHUMI mice harbour representatives of the human intestinal tract, but it is also necessary to study the obesogenic effects of C. ramosum in complex microbial communities in mice and later on in humans. Nevertheless, we strongly believe that the underlying mechanism can only be elucidated by doing mechanistic research with gnotobiotic animals.

Once it is understood how C. ramosum promotes obesity development, pharmaceuticals that prevent the C. ramosum-mediated effects could be developed. Such drugs applied to obese patients in combination with other weight-reducing measures might help to reduce their body weight. Another possibility is to specifically inhibit the growth of C. ramosum in the gut by antibiotics or, even better, by dietary means (e.g. low-fat diet; essential oils with antimicrobial activity). However, more research is needed before specific recommendations can be given.

Increase of Erysipelotrichaceae in response to high-fat diet feeding in C3H/HeOuJ mice:

Increase of C. ramosum within the SIHUMI community in response to high-fat diet feeding in rats:

Another obesogenic, but gram negative, bacterium: