The incidence of type 1 diabetes is increasing worldwide, showing a particularly sharp increase among children under the age of 5 years. A previous study has shown that children aged 1-5 years diagnosed with new-onset type 1 diabetes have a less balanced composition of gut bacteria compared with children of the same age without diabetes.

Stool samples from 6-month-olds that participated in the BABYDIET study (consisting of high-risk first degree relatives of patients with type 1 diabetes) were analysed to study the role of the gut microbiota in the development of the infant immune system prior to autoantibody seroconversion. 40 children that had not already developed their first autoantibody were studied. Data on the duration of breastfeeding and the introduction of solid food were also taken into account.

At age 6 months, gut microbiota co-occurrence patterns based on three stable communities (C1, C2, and C3) were described. When studying the temporal development of abundances of microbial genera in the communities using samples taken over 2 years, the researchers observed that dominant bacteria in each community tend not to maintain. 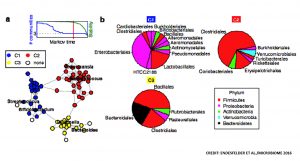 Stratification of children based on abundances of genera in each community revealed functional associations between dietary factors, gut bacteria, and islet autoantibody development. Communities C1 and C2 were strongly associated with breastfeeding and solid food introduction, respectively. The third community (C3) revealed a subgroup of children that were dominated by Bacteroides abundances compared to two subgroups with low Bacteroides and increased Akkermansia abundances. The Bacteroides-dominated subgroup was characterized by early introduction of solid food components, increased risk for early autoantibody development, and lower abundances of genes for the production of butyrate. In Bacteroides-dominated communities, sulfate-reducing bacteria dominated the ecosystem and were the main contributors to the removal of hydrogen. On the other hand, in Akkermansia-dominated communities, abundance of acetogens might be increased due to lower levels of sulfate, leading to increased levels of butyrate through the co-fermentation of acetate. Based on these observations, the researchers hypothesized that butyrate could have a protective effect on the development of anti-islet cell autoantibodies. Early autoantibody development is associated with differences in composition of mucin-degrading bacteria (Bacteroides and Akkermansia) and the early introduction of solid food.

In conclusion, increased abundances of Bacteroides may precede anti-islet autoimmunity in children at increased risk for type 1 diabetes. Results of this study support the hypothesis that increased availability of butyrate in the intestinal tract could have a protective effect on the development of type 1 diabetes. However, further large sample size follow-up studies are needed in order to validate this hypothesis.