Foods are processed in the upper digestive tract and pass into the colon when entering the digestive system. A new paper outlines the impact of food consumption in shaping bidirectional communication between digestive responses and the digestive sensations occurring before, during and after a meal. 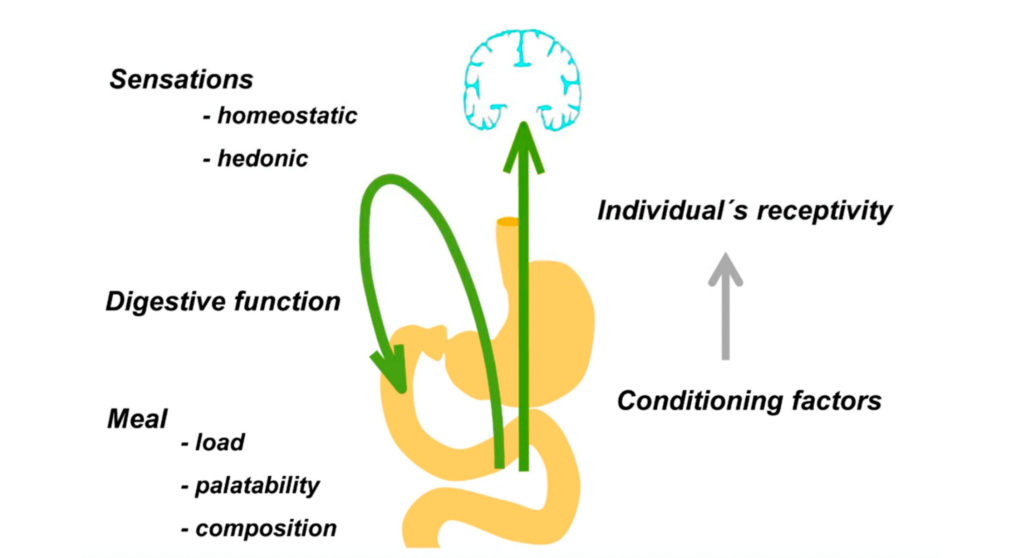 A sequence of physiological processes occurs in the digestive system after food ingestion. Although a balanced diet is important for gut health and overall wellbeing, the individual pleasure dimension also matters.

Livovsky and colleagues looked at human data on factors that determine the digestive experience and sensations before, during and especially after a meal.

The physiological digestive response to food ingestion has been widely studied and it is known that it comprises three semi-sequential steps: cephalic, luminal, and post-absorptive. First, meal substrates are extracted by a process of digestion and absorption that start in the mouth and extend to the terminal ileum. Later, meal residues that do not get absorbed in the small intestine pass into the colon and activate the metabolism of the gut microbiota, which in turn can affect digestive function.

Foods can also induce sensations before, during and after food ingestion due to the gut’s ability to sense and respond to intraluminal meal-related stimuli. These sensations basically include:

Although the third group has been subject to limited study, these food ingestion-related sensations play an important role in the way different foods become acceptable to people, especially in the context of functional gut disorders.

The postprandial experience involves both homeostatic (i.e., satiety, hunger, and fullness) and hedonic sensations (i.e., postprandial mood and digestive well-being). And in that regard, the authors cited digestive function (suited processing), the characteristics of a meal (amount, palatability, composition), and the receptivity of the eater (i.e. the individual’s responsiveness, influenced by multiple conditioning factors) as the most important factors that influence the postprandial experience.

To sum up, digestive function, a meal’s characteristics and an individual’s receptivity are major factors that are important when considering how humans respond to food ingestion. Without forgetting the importance of a balanced diet (in terms of both food group and nutrient composition), biological responses to food ingestion are worth considering as means of improving quality of life in the context of personalized diets and digestive well-being, in both healthy individuals and those with digestive symptoms.

This review article belongs to the special issue “Food and Diet for Gut Function and Dysfunction” in the peer reviewed open access journal Nutrients. This issue was instigated by the European Society of Neurogastroenterology and Motility, guest edited by Profs Fernando Azpiroz and Paul Enck, and made possible through an unrestricted educational grant from Danone.

Can probiotics have anti-inflammatory effects worth considering in chronic intestinal diseases?

Inflammation has been involved in the onset of chronic diseases. Probiotics emerge as a potential dietary tool for managing those conditions, partly through their role in immune system modulation and the anti-inflammatory response. Find out what is known about the anti-inflammatory effects of probiotics and their potential applications at the bedside.

Yeast probiotics for the management of gastrointestinal symptoms of IBS

Bacteria and fungi in the human gut microbiota may contribute to the underlying mechanisms of IBS, which means the latter can be explored as a potential target for IBS. This article explores what is known about the role of the gut microbiome and yeast probiotics in irritable bowel syndrome.

Fecal transplants and defined commensal consortia: the pros and cons of restoring the gut microbiome in recurrent Clostridioides difficile infection

Correcting the altered gut microbiome is an important goal in Clostridioides difficile management, but the matter is not addressed by mainstream treatments with antibiotics. This article focuses on where fecal microbiota transplantation and investigational microbiota-based therapeutics stand for C. difficile infection (Part 3)