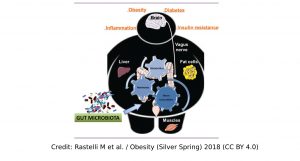 A new review, led by from the Metabolism and Nutrition Research Group at Université catholique de Louvain in Brussels (Belgium), discusses key mechanisms involved in the crosstalk between gut microbes and host cells in obesity and metabolic disorders.

Dr Cani corresponded with GMFH editors about the significance of the work.

The scientific community still does not know how gut microbiota drives obesity. What features do metabolic disorders share regarding the composition and functional diversity of the gut microbiome?

There are multiple factors influencing the development of obesity and associated metabolic disorders. This is clearly a complex process, but we are now convinced that there is at least a strong association between both gut microbiota composition and activity. The key questions regarding [the role of the gut microbiota in obesity-related disorders] remain a matter of debate. First, does altering our food choices and eventually the nutrients that we ingest influence the composition and the metabolites produced by the microbiota? Secondly, are some of us more prone to the onset of metabolic disorders because our microbiota is less “diverse” and “lacks” some specific bacteria or metabolic functions?

The answer to these questions is not easy but whatever model is used, the production of numerous biological agents (i.e. hormones, peptides, and neurotransmitters) is under the influence of microbial metabolites. They likely contribute to explaining the impact of our microbiota on appetite/food intake, glucose/lipid metabolism, and many other things. As described in this (and other´s) review, nervous and endocrine routes are explored that are influenced by products derived from our gut microbiota. Therefore, targeting the endogenous production by selecting key nutrients (e.g., prebiotics to increase GLP-1/PYY production) may be one option. Using native molecules is also possible and currently under investigation (here; here; here; here).

What mechanisms are involved in gut microbiota interaction with host cells in the context of obesity and metabolic disorders?

In our review we summarize the different routes by which microbial metabolites may affect the host metabolism, as well as the very diverse type of chemical compounds (i.e., peptides, bile acids, small molecules, gazes) that are involved in such complex machinery. We discuss different metabolites and various mechanisms by which they influence host metabolism.

Do you think in the future gut-related biomarkers will be useful to detect metabolic conditions in the clinical setting?

Despite all putative microbiota or metabolic biomarkers that have become available, it may be quite difficult to prove that they are more reliable than those validated factors (e.g., blood parameters) used in hospitals today. To pose a provocative questions: Do we really need to analyze our microbiota or some microbes to identify our risk of type 2 diabetes when glycaemia and insulinemia have been used with confidence for decades? Probably not!

On the other hand, future possibilities are probably far exceed our current knowledge and expectations. We are looking at things with our current view of medicine and the tools currently available; therefore, we may underestimate the opportunities arising. One such example (not yet for metabolic conditions) that will become reality in the near future is the detection of very early stage carcinoma (e.g., of the liver), currently only feasible using invasive methods (e.g. biopsies).

Finally, predicting diagnoses or responses to selected, e.g. dietary therapies, or identifying highly specific gut bacteria-derived, e.g. cardiovascular risk factors (e.g. Trimethylamine-N-Oxide, TMAO) that may be counteracted by a natural plant product (e.g. 3,3-Dimethyl-1-Butanol, DMB) just illustrate that we have arrived at the edge of clinical relevance, even though it may still be a long way to go before these may become medical routine tools in the hands of GP and medical practitioners.

Which metabolites, neurotransmitters and specific pathways would it be worth considering when studying the gut-brain axis’ role in our metabolism?

There is not one pathway that is more important than another and which can explain all the behavioral changes. The most important point is where, when and how to measure them. Apart from all these important questions, we must also consider that most factors produced in the intestine act locally by activating specific receptors and/or by stimulating the enteric neurons (as discussed in our review and many other papers). Therefore, we can completely miss their relevance. Finally, there are many metabolites produced by our microbiota that are the same as or that are chemically very similar to the ones produced by our own human cells (e.g., GABA, serotonin, endocannabinoids and many others). The question, therefore, is how to distinguish them? This is not easy, but it is possible.

How could studying the link between microbes and the onset of metabolic diseases help us in developing next-generation approaches to preventing or curing obesity and other related metabolic disorders?

There are probably key species or key metabolites produced in the gut that are of utmost importance, as well as specific dietary interventions that are great for one person but neutral for another. Therefore, we need to scrutinize all the parameters we can (i.e., species, metabolites, cross-talk between microbes, host response to metabolites/diet, and many others) before attempting an answer to your questions. There is unlikely one-size-fits-all solution or a “magic bullet”. Instead, we will likely have additional tools to support and improve current medical approaches.

Regarding next-generation beneficial microbes, the simplest example I can share is my own 10-year experience with Akkermansia muciniphila. We and others have shown that the presence of this bacterium is inversely associated with obesity and metabolic disorders. In collaboration with Prof. Willem de Vos, we showed that the administration of the bacterium improves gut barrier function, reduces body weight, fat mass gain and steatosis, and lowers insulin resistance and plasma cholesterol in diet-induced obese rodents (here; here). We then discovered that the pasteurized bacterium was more efficient than the live bacteria and we isolated some active compounds. Since doing this, Akkermansia muciniphila has been administered in a small cohort of human volunteers with a metabolic syndrome and according to unpublished data, it seems to be safe.

Of course, we cannot cure or prevent a metabolic disease without attacking the root causes, and not just by adding a lacking bacterium. In this situation, I am convinced that an appropriate dietary intervention associated with physical activity is still the best therapy, and if we can boost both the metabolism and the subjects’ motivation, that is a large step forward.

The benefits of fecal microbiota transplantation in treating Clostridioides difficile infection are well documented. Despite this, a new study concerns the transfer of extended-spectrum beta-lactamase-producing Escherichia coli in two immunocompromised adults.